Report and pictures from our lepidopterology and odonatology expert, Keith Powrie

After 2 missed weeks, due to incessant rain and/or wind, we managed to fit in a walk, before the next lot of rain arrives!

Week 19 produced a count of 25 butterflies, so we weren’t expecting a tremendous number, after all the rain and cold winds of late. However, the warmth of the sun, albeit accompanied by a fresh breeze, enticed 33 to take to the wing. The majority were Whites, with 15 Large, 5 Small and the first of the summer brood of Green-veined Whites with 3.

And the first Purple Hairstreak of the year.

Dragonflies were mainly seen around Dragon Pond and various sites in the Gardens, away from the various water features.

Dragon Pond boasted a very inquisitive Southern Hawker, who hovered close enough that the broad antehumeral, or shoulder stripes could be clearly seen.

A Migrant Hawker, chased off by the previous species.

A coupled pair of Ruddy Darters trying to mate, but being chased off by a bumble bee. And 2 coupled pairs of Common Darters, egg-laying, with a lone male resting nearby.

A blustery day but sunny, until until the clouds built up!
The first half of the walk produced mainly ‘whites’ again, with a few Red Admirals, a Holly Blue and a fleeting Speckled Wood.

Dragon Pond, once again held all the dragonflies.

A single male Blue-tailed Damselfly, a male Ruddy Darter, 2 Common Darters and a female Southern Hawker, busily egg-laying. We followed her to both Lower and Upper Falls Ponds where she deposited further batches of eggs. 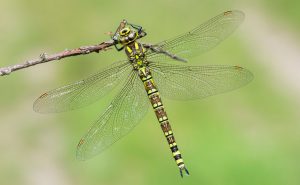 Then the clouds rolled in and very little was seen after that!