Regrettably this event has been cancelled. Please check later in the year
for further information. 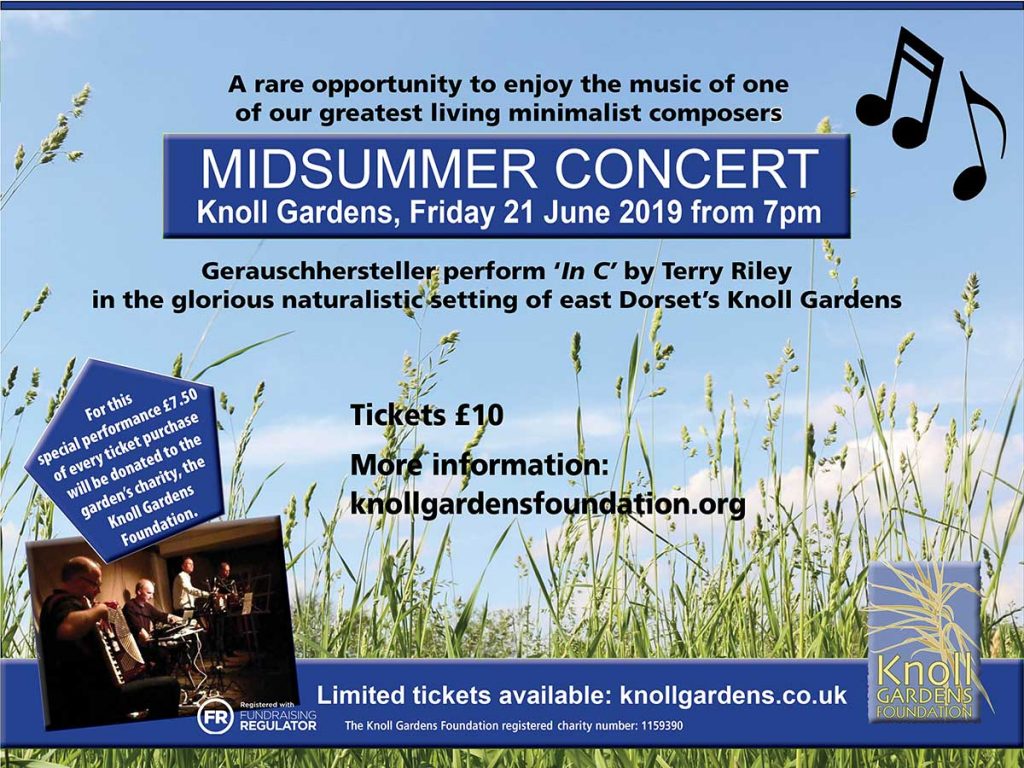 Fans of experimental music have a rare opportunity to hear In C by Terry Riley, one of the greatest living minimalist composers, in the glorious surroundings of Knoll Gardens in Wimborne in June.

Tickets for this midsummer evening concert are £10 and gates open at 7pm. Audience members are encouraged to bring rugs, blankets and a picnic to best enjoy this innovative meditative 1960s experience in the garden.

Ticket numbers are limited and can be booked online through knollgardens.co.uk. The performance is taking place as a fundraiser for the Knoll Gardens Foundation.

Following their 2018 appearance at Knoll, Dorset-based musical ensemble Gerauschhersteller will return with a special midsummer outdoor performance of Riley’s acclaimed composition at 7.30pm on Friday 21 June.

Riley composed In C in 1964 as 53 short repeated melodic and rhythmic cells in C major. How often each melody is repeated, or how coloured or intensified, is completely the choice of each individual player. Every version is different and the beauty of the piece lies in the variety of harmonic and rhythmic detail generated by these simple cells.

Terry Riley was among the most revolutionary composers of the post-war era; famed for his introduction of repetition into Western music motifs, he also masterminded early experiments in tape loops and delay systems which left an indelible mark on the experimental music produced in his wake.

Stuart Riddle, speaking on behalf of the group, said “In C uses very simple components, and some simple rules, to create a piece that is different and new each time someone plays it – it can be meditative, intense, or even funky. We are really honoured that Knoll Gardens have given us the opportunity to perform on the evening of the summer solstice and take this piece back to its roots in 1960s counterculture and Terry Riley’s own all night performances”

Gerauschhersteller’s new CD features highlights of their 2018 performance at Knoll.